The goal of this project is to help drivers safely interact with ubiquitous HCI demands and benefit from proactive information services in cars. Our prior and ongoing projects primarily explore the ‘interruptive’ feature of ubiquitous HCI demands in cars. We have been rigorously addressing the issues of when to intervene by using our sensor-based assessment technologies that estimate drivers’ cognitive load in near real-time. In this project, we extend the key technologies in the projects to help users understand how an in-car system is interpreting the state of the world around them. We aim to support intelligibility of system behavior in cars, including the issues of what intervention to make and how to intervene. 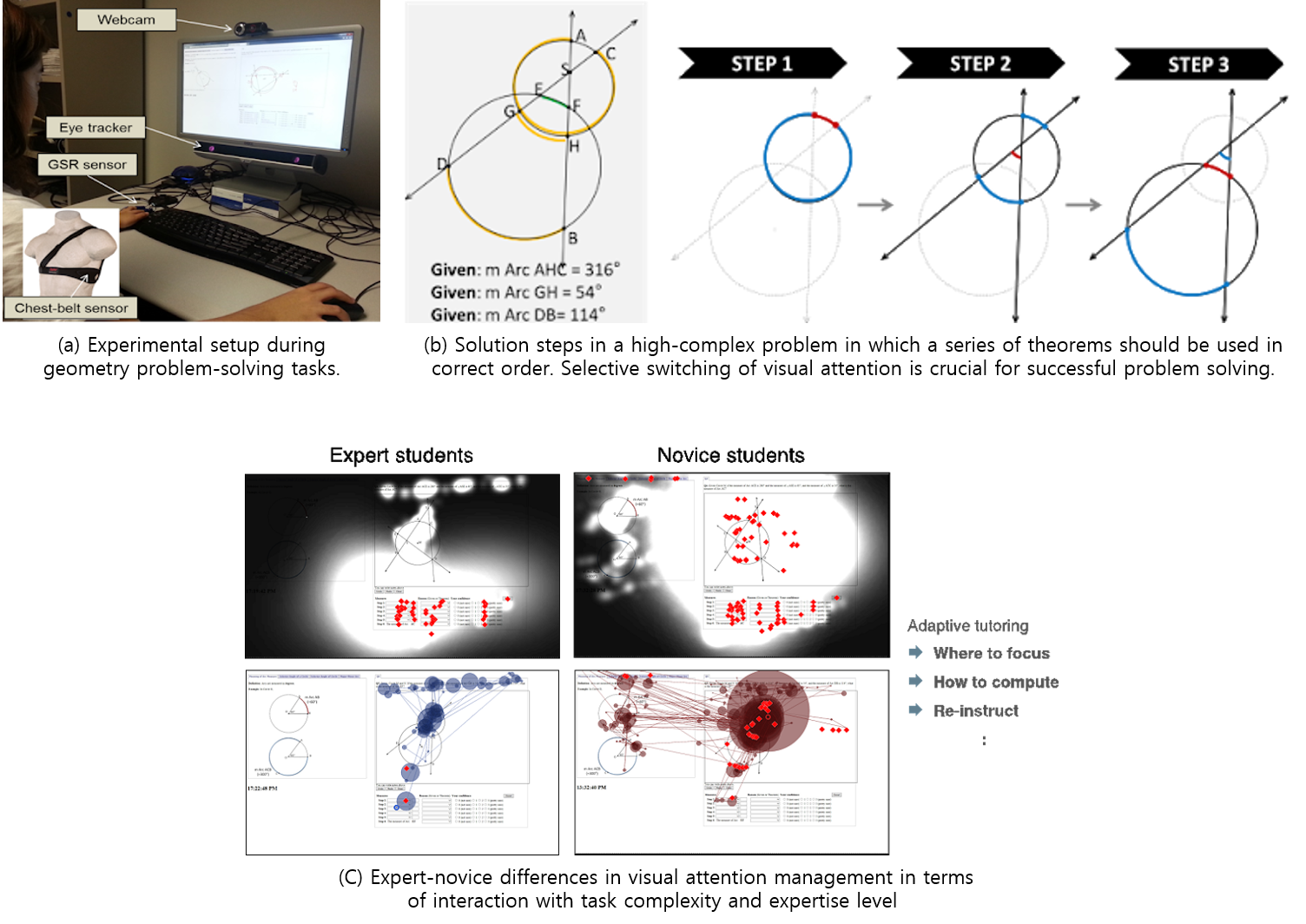 Figure 6. Sensor-based assessment of real-time mental workloads during a set of elementary cognitive tasks in psychology and cognitive science.

This project explored the effects of AR technology, when combined with a range of 3D prototype applications.

The goal of this project is to improve perception and performance during touch-based interaction in personal electronic devices. Specifically, we have identified the appropriate fusion of visual, audio, and haptic cues during fingertip interaction with touch screen images (Figure 10a).

This project aims to understand users-on-the-go in connected environments and to improve the quality of their ubiquitous HCI experience by enhancing machine intelligence to be more human-centered. Much of the preliminary work for this project has been completed, and the ongoing work for this project will develop in two phases: 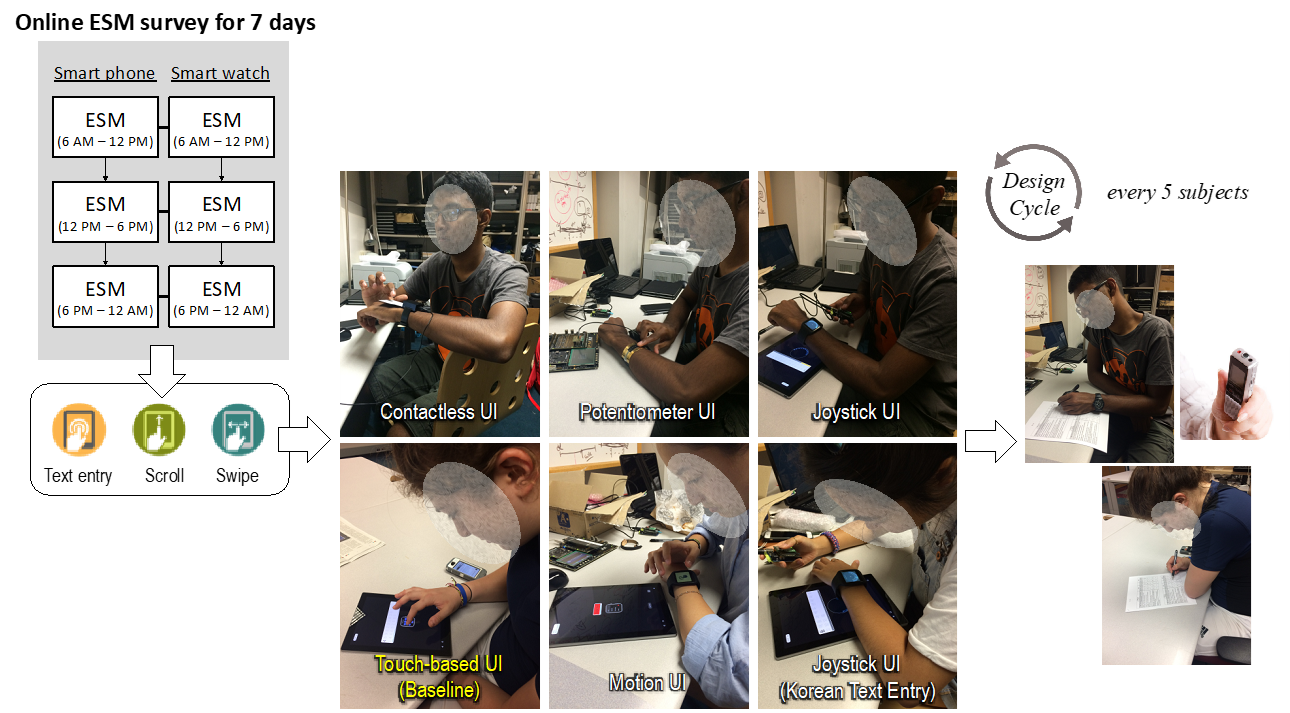 (a) Usability testing for novel wearable UI prototypes that the project partners (i.e., KETI and Celluon) have developed 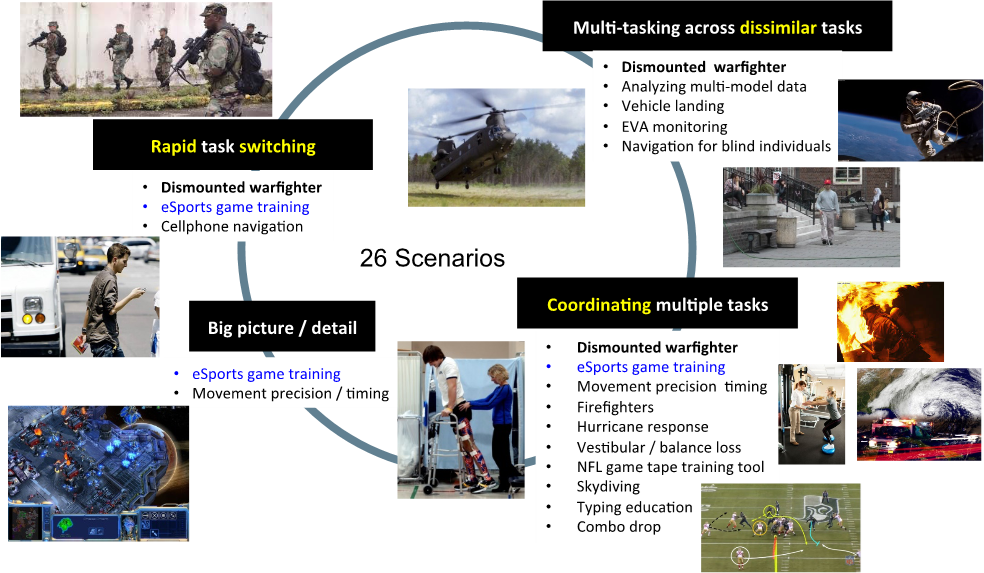 (b) 26 scenarios that the project sponsor (i.e., Draper Lab) illustrated for the verification of our contextual framework.

Figure 11. Preliminary work for Phase 1 and Phase 2 to explore the proposed scope of this project.

In this project, we will investigate what impacts an intelligent automotive physical system that delivers relevant interactions can have on drivers. This project will use a motion platform and a VR headset to simulate various driver / driving scenarios where computers autonomously determine the vehicle’s physical actions (i.e., self-driving or computer-assisted driving situations) (Figure 13). Also, in this project, we will employ a range of sensors to track driver cognition, attention, and behavior in real time to detect / predict a driver's condition and experience.

Figure 6. Sensor-based assessment of real-time mental workloads during a set of elementary cognitive tasks in psychology and cognitive science.